Kayon Mountain DIPA: a coffee beer collab that had baristas involved from start to end

We can’t wait to have a sip of Kayon Mountain DIPA, a collab coffee beer brewed by Thirst Class Ale and engineered by our friend Nick Harris from B’Spoke Coffee using our favourite natural Ethiopian. The good news is that we won’t have to wait long. The beer launch is taking place at the roastery in Royal Mills this Saturday 22nd at noon and guests will be able to try the DIPA first hand, sampling it side by side with the coffee used in the process to compare the two and find out how exciting coffee beers can be.

Roasters and brewers, natural allies
Coffee beers have seen a revival in the last few years as independent breweries and specialty coffee shops boomed. The lighter roasts of today’s coffee allow brewers to break free from stouts and experiment with a variety of styles, from blondes and pales to sours and wild ales. Back in the days when dark roasts were the norm, “brewers who wanted to use coffee felt the only option was to work with a beer that had similar flavours to the coffees widely available at the time – so the roasty dark malts in stouts and porters made them the obvious choice”, recalls Richard Conway, founder of Thirst Class Ale.

Also, brewers and roasters seem to have discovered natural allies in each other.  “Many people who enjoy good coffee also enjoy good beer, so I think this shared interest has led to a desire to work together and get to know each other’s processes – with the inevitable result of combining the products”, says Richard. The Kayon DIPA is the second beer he makes with one of our coffees, the first one being a coffee red ale collab with Torrside Brewing in New Mills called Red Shift. “Working alongside the roaster means you can not only choose a variety of coffee to compliment a particular beer style but you can also influence the roast to get the perfect flavour profile.” 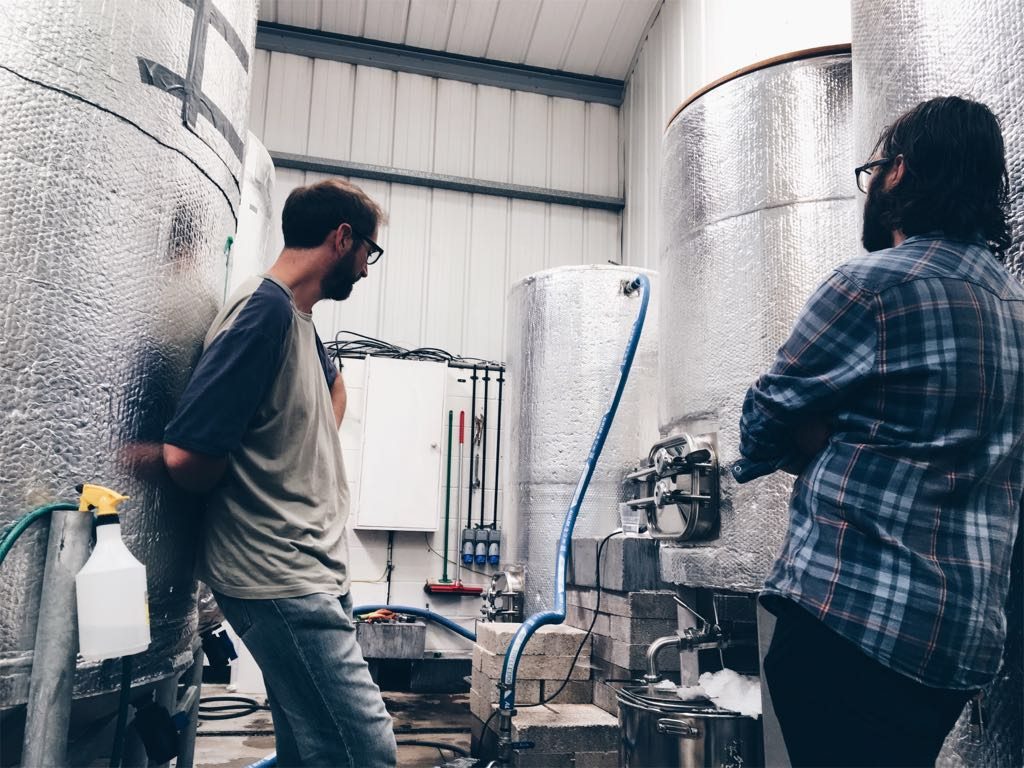 Richard (left) and Nick (right) watching a process called “Sparging”, when the grains are rinsed with hot water to extract flavour and sugars (photo by Mani Keleher)

A bright coffee for a hoppy ale
Talks about using our natural Ethiopian in a beer started months ago, when Nick and Richard talked about getting baristas and brewers involved in the brewing process together in a more hands on fashion rather than just having the roastery send the coffee over to the brewery by courier. Mani Keleher, our head roaster, got chatting with them about the roasting/brewing process and Dimitar Todorov, a friend and barista at Pollen Bakery, jumped in to act as chief taster. Nick says their goal was to make a brew that would “balance/compliment the hops and the coffee, highlighting the blueberry, pineapple, citrus and floral notes. The hops we got had aromas just like Kayon’s tasting notes. Combined, the coffee brought out more of those flavours”.

After the coffee was roasted and rested, the beans were coarsely ground and steeped in the base beer with the remaining ingredients and later strained once the cold brewing process was finished. There are several ways to use coffee in beer, but Richard believed cold brewing was the best method for this DIPA and discussed with Mani the optimal exposure time and temperature to extract the flavours he was looking for without picking up undesirable ones.

The baristas were involved in the whole process of making this beer, from conception to choosing the right beans and actually brewing it! (photo by Mani Keleher)

Simple process, complex flavours
As the DIPA is very strong and hoppy, Richard knew he would need a generous amount of a powerful coffee to balance the flavours out. If there’s one thing we can say about Kayon Mountain is that it’s not a subtle coffee. Bright like yuzu (the tart Japanese citrus fruit) and juicy with a combination of berries and tropical fruit, Kayon took our staff and customers by storm and became an instant favourite. Its characteristic flavours never faded when added to milky drinks – and we are about to find out how they’ll shine through malt and hops. Richard is still being secretive about the finished product, but assures it’s “epic”.

He describes the brewing process as a fairly simple one: “We used one malt variety (Golden Promise) to give us a clean base with a slightly sweet malt profile. We then steeped loads of hops at the end of the boil and added loads more dry hops at the end of fermentation. The process for adding the coffee was to place the grounds in a large muslin bag which we suspended in the tank of beer. We left it for a little over 24 hours before removing it, chilling the beer then kegging and bottling it.”

This beer is being launched as a small batch: Thirst Class brewed only 300 liters of it. The DIPA will be available (not for long!) from the 22nd in bottles you can buy at the brewery’s shop and webstore plus in both bottle and keg at the shops and bars they supply. You can find a list of their stockists here. Happily, this shall not be the last coffee beer brewed by Thirst Class. After marrying the flavours of hops and coffee Richard will start searching for the right beans for a saison. “We’re keen to try a coffee saison as we’re sure there’s a coffee that would compliment the yeast-forward character. Watch this space!”, he points out. We’ll sure do.

To attend the beer launch on the 22nd of September please RSVP here. Entrance is free. There will be more beers on tap being served by Thirst Class Ale, DJs, treats baked by local bakeries and malay street food by Nasi Lemak.