Why is good decaf more expensive?

It’s common for cafes to charge a few pence more for decaffeinated coffee. A puzzled face on the customer’s face is a common reaction. Why charge more for a drink that has close to no caffeine in it, right? What most people don’t realise is that the process to remove caffeine from beans while retaining flavour is a costly, time consuming and a highly technical one. And decaf’s fame for being a tasteless medical-reasons-only drink is a thing of the past. These days there is enough technology to make decaf delicious and full of complex flavours. So much that we believe it’s worth paying a bit more for it. 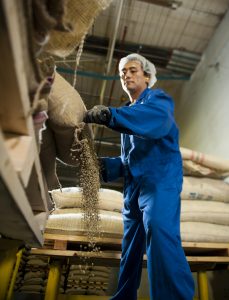 Green beans being dumped into tank with GCE at Swiss Water in Burnaby (Photo: Swiss Water)

Decaf’s bad rep has a long history. Chemical solvents have been used to remove caffeine from coffee beans since the beginning of the 18th century, but whilst being effective to isolate caffeine, chemicals result in residual off-flavours in coffee, not to mention potential health implications that arise from the process. Today the main chemicals used are ethyl acetate (branded “sugar cane” or “molasses” decaf) and methylene chloride. Though the processes are regulated by health agencies and deemed safe for consumption, the consequences for flavour mean companies will usually choose low-quality beans to produce decaf. Hence our expectations of it being so low.

According to Marisol Pinzon, Export Manager at Swiss Water Decaffeinated Coffee Company – one of the main companies producing chemical-free and tasty decaf, established in the 80’s in Canada – “the majority of decaffeinated coffee out there is still chemically processed. It amounts to 70% to 75% of the offering worldwide”. She tells us that one of the main solvents used on the so called direct or indirect processes is also widely used as solvent in paint and varnish strippers. “Even with regulations there are residues. You can imagine how hard these substances are. That is why we offer a ‘better-for-you’ product with no chemicals used at any stage.”

If chemicals are so bad, why are they used at all? Well, the answer is obvious: the chemical processes are cheap and fast. In order to create a healthier product with high cup quality you need time, investment and a lot of science. The Swiss Water, for example, have developed their own method to maintain original flavour and compounds from green coffee and focus on the extraction of caffeine. The caffeine-free liquid resulting from this process was named Green Coffee Extract (GCE). Gentle caffeine removal starts using a green coffee extract (GCE) and the proprietary carbon filtering system. The GCE is water saturated with soluble coffee components minus caffeine. The beans are held in extraction tanks where the GCE flows over them. Looking for equilibrium, the caffeine begins to migrate from the coffee beans into the GCE. 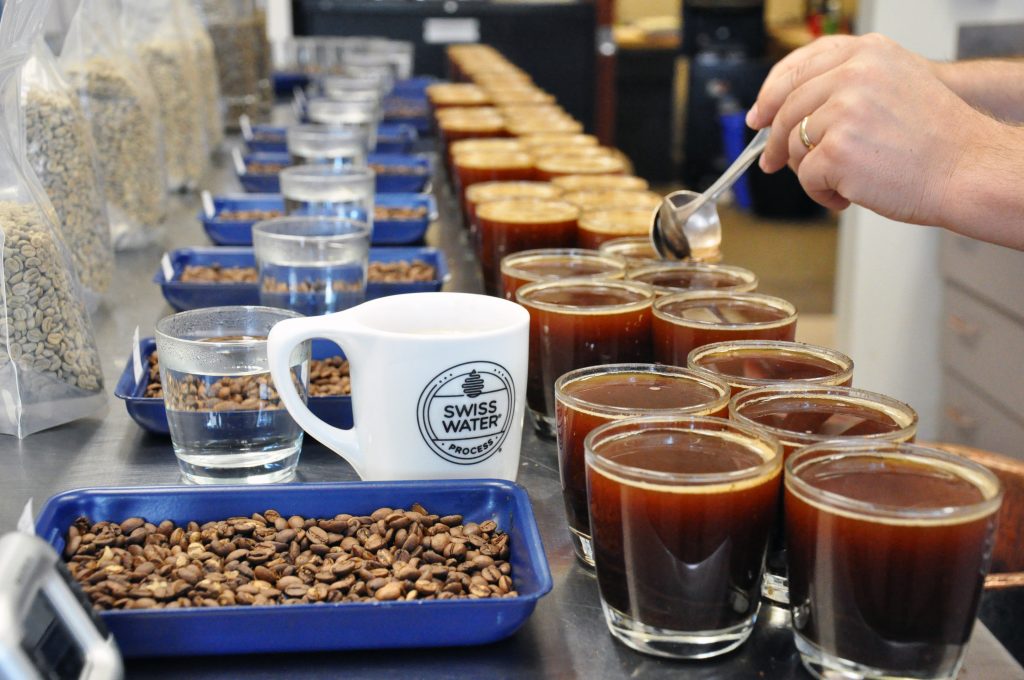 Every decaf coffee is compared to it’s regular counterpart to assure variation in taste is minimal (Photo: Swiss Water)

This process takes about 10 hours and by carefully controlling time, temperature, and flow, SWISS WATER Process can optimize the driving force which removes caffeine from the green coffee into the GCE. The result is a net extractive process whereby only caffeine is removed, leaving the coffee’s unique origin flavour characteristics intact. As a result “we retain 95% to 98% of the acids (responsible for flavour) and remove up to 99% of the caffeine”, says Marisol. The team has a strict quality control and tastes each coffee with its regular counterpart side by side to compare the results and make sure the flavour variation is minimal. “Our process focuses on quality and we don’t recover caffeine (it can be sold as a byproduct to make caffeinated fizzy drinks and energy drinks, for example).You obtain a dark product that would have to be chemically processed into the white powder sold commercially, but we want to be totally free of chemicals”, says Marisol.

Another solvent-free process that has gained popularity in Europe is the Natural Liquid Carbon Dioxide one, also known as Sparkling Water process. Developed by German company CR3 in 1988, it consists of soaking green beans in liquid CO2 taken from underground sparkling water in a tank with high pressure and low temperature. The CO2 bonds with the caffeine and is later separated from the beans, which then undergo a drying phase.

“I have always been a big fan of the CO2 process because of the way it leaves a lot of the flavour in the coffee without the caffeine. However, the process is complex hence the expense. Plus there is a 5% weight loss”, says Mike Riley from Falcon Coffees, one of the green coffee importers we work with here at Ancoats. According to him, the Sparkling Water process results in roughly £ 1 extra to each kilo of green coffee.

Why decaf adds value to your drink

While big companies and chains that source coffee within the commodity market can absorb the price variation more easily, independent specialty cafes, that pay premiums for quality beans and therefore work with narrower margins on their products, are not always able to do so. We’ve been there ourselves and only stopped charging more for decaf after we started serving single origin coffees on our espresso-based drinks, what pushed their price up a bit anyway.

Like Marisol, we believe decaf isn’t a drink with less value. “It’s great that cafes charge more for it because (by decaffeinating coffee) we are adding value to it!”, she says. Decaf that tastes good means people that are sensitive to caffeine or those that enjoy coffee but don’t want too much of that kick can actually cherish a brew without worry. Consumer analysts Allegra Strategies inform that consumption of decaf is slowly on the rise: it is the go-to drink of around 7% of people in the UK today. It’s a lot of people not to care about. And though we don’t undervalue the importance of caffeine on our daily lives, most of the coffee we drink is for pleasure. So if decaf can taste amazing – and it can – why not go for it?