Getting coffee from Yemen is difficult. Buying it isn’t cheap. Yet it’s flavours can be so exquisite more and more Yemeni people are putting in the effort, facing the dangers of turbulent war zones to ship it to the West. But the civil war the country has been in since 2015 is not the only barrier between Yemeni coffee and us. Production of khat, a plant whose leaves are illegal in many places, and quick money from the Saudi and the Arab Gulf markets for low grade beans make it harder to local farmers to see the advantage in investing in Specialty coffee. While many problems may seem impossible to solve at the moment, we can expect great things of the young – and bold – Yemeni generation. 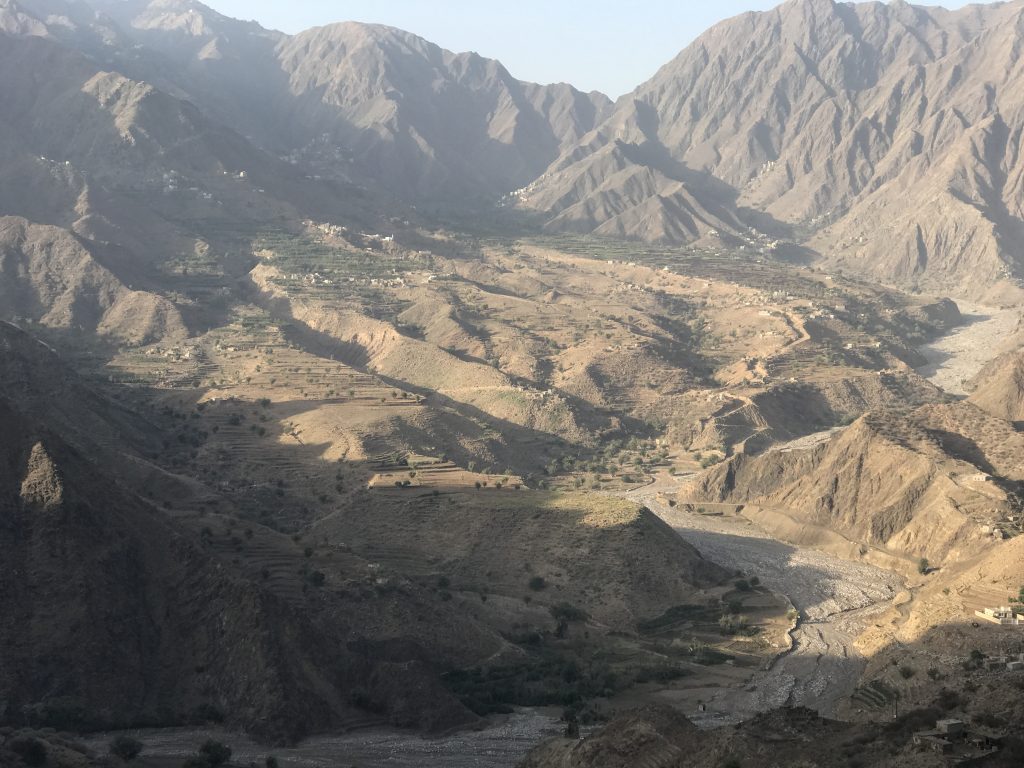 Coffee is grown on terraces where the mountains shelter the trees and create micro-climates (photo: Mocha Hunters) 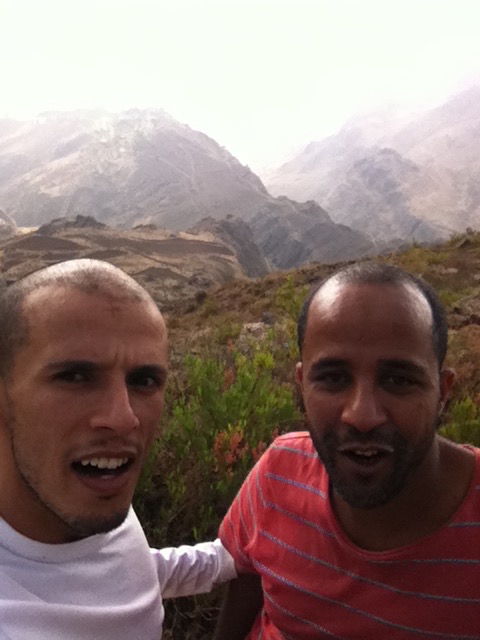 Mohammed (left) and Hussein (right) in one of their trips to Yemen (photo: Mohammed Ali)

Civil war? They are more worried about quality control

Mohammed Ali Nasser is an example of young Yemenis striving to put the country back on the map of coffee. He moved to the UK as a teenager to study, play football and see the world. Back then, he didn’t even drink coffee. “In Yemen we prize cascara [the dry cherry skin that can be brewed as a tea]. I drank that every time I visited my grandparents as a kid”, Mohammed tells us. He only discovered how good coffee can be in 2010, when his friend Hussein Ahmed brewed him beans he’d brought from Yemen. “I started noticing the flavours and was soon convinced.” He then decided to join Hussein on a journey to promote Yemeni coffee in the UK and in Yemen itself. After years of travelling and gathering experience, Hussein founded a green buying company called Mocha Hunters, of which Mohammed is a British representative.

“There are many challenges, but the main one is to convince farmers to pick only the ripe cherries. For them, that is losing money and time”, Mohammed explains. “Unfortunately, they pluck all cherries at the same time and mix everything, from unripe to defective beans, and sell it to the local market, the Arab Gulf or Saudi Arabia, where you can buy it from spice shops. There is no quality control. “I’d say only 10% of the farmers have tasted their own coffee, even when their produce reach the Specialty standard. They don’t know how great it can be!” As the trade between the neighbouring countries has a long tradition, Mohammed says local governments facilitate the exchange. There, after a really light roast, the coffee is mixed with cardamom, cinnamon and other spices to become what is known today as Kawa Arabia or Arab Coffee. “The Specialty industry is emerging in the Gulf countries, but they still buy commodity coffee from Yemen”, says Mohammed.

Why is it so expensive?

The same aid doesn’t exist when it comes to shipping coffee to the West. Mohammed says it takes him a phone call to get the coffee here, but behind that phone call there is an extraordinary effort in logistics. “The struggle is to cross the military borders in the war zones. You have to know people, pay your way through and work with companies abroad”, he explains. “Transporting samples is also hard and I can’t even tell you how we do it in order to make sure it arrives safe and in good shape.” Mocha Hunters has to send every coffee to the U.S. before bringing it to the UK. They shipped 750 kilos of high grade Fadli – a local varietal – to the U.S. last month. 2 kg of that coffee were sent over here by airmail under the cost of 150$. No wonder the premium people pay for Yemeni coffee. According to Mohammed, the average price for a high quality Yemeni green coffee ranges from 30$ to 150$ per kilo.

Yes, it’s expensive. But Yemeni coffee is beautiful. It’s sweet and creamy, combining the flavours of chocolate and tropical fruits in a unique way. Behind it is the work of men, women and children on the high slopes where the coffee grows partially shielded from the hot sun trees are genetically equipped to handle and people have learned to endure. There is no electricity, which means Yemenis rely on generators and diesel they can’t afford. Saying it’s epic doesn’t cover it. “Yemeni people are so hard working because they have to fight for water, for food and for everything else”, Mohammed says. 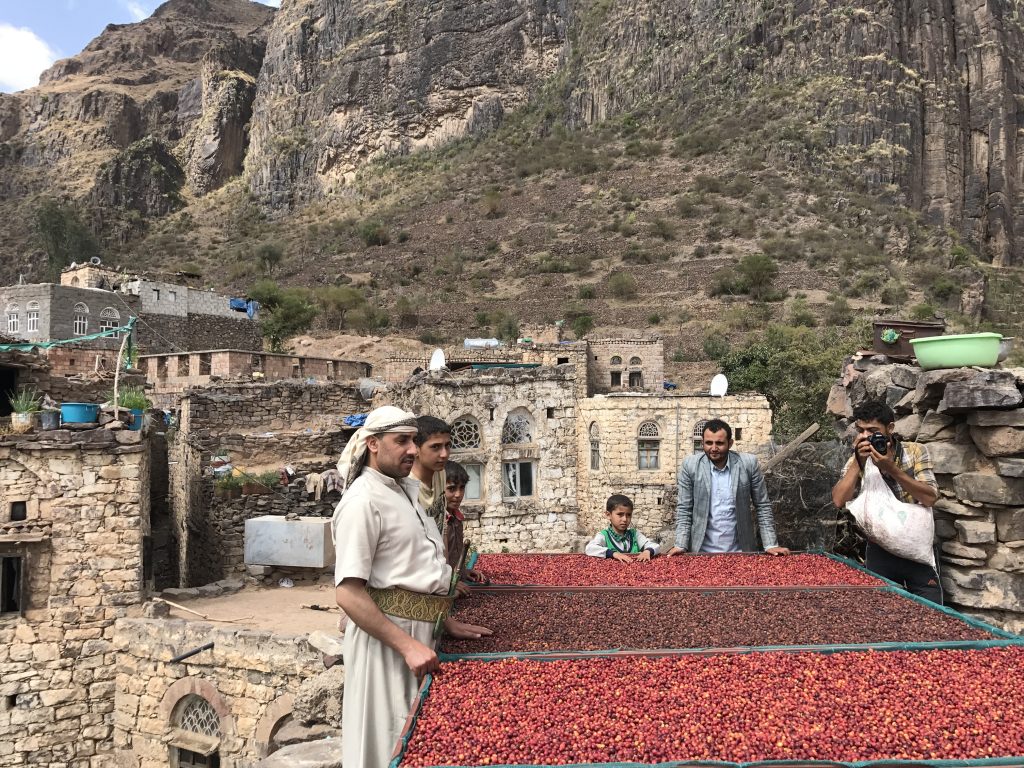 Coffee plantations in Yemen are located in different mountain chains at the average altitude of 2,000m above sea level. They grow coffee in terraces, which help to shade the trees. Temperature ranges from 15 C to 20 C and the sun is relentless, making man-work an arduous task. Yet the conditions are perfect for coffee and the trees have developed tolerance to the short water supply and pests. Most farmers don’t use any chemicals. “Shade and shelter from the mountains create micro-climates. And a different mountain means you’ll get a very different coffee”, says Mohammed. Because there is so little water, you can only find natural processed coffees there.

As you read this Mohammed’s team is building raised beds in Yemen to improve drying of the cherries. They are upgrading storage (coffee used to be stored next to diesel barrels), separating lots that are traceable to the producers, introducing GrainPro bags to secure quality after shipment and cleaning the lots of defective or unripe beans. He is learning and getting feedback about his coffee with different roasteries such as ourselves so he can pass the information forward. He knows his coffee has to be more interesting than your average Specialty Ethiopia to justify the price. And he knows he has to work closely with farmers harvest after harvest and make sure they get paid or they’ll slip back into selling coffee to the commodity market. Or worse, they’ll grow khat. 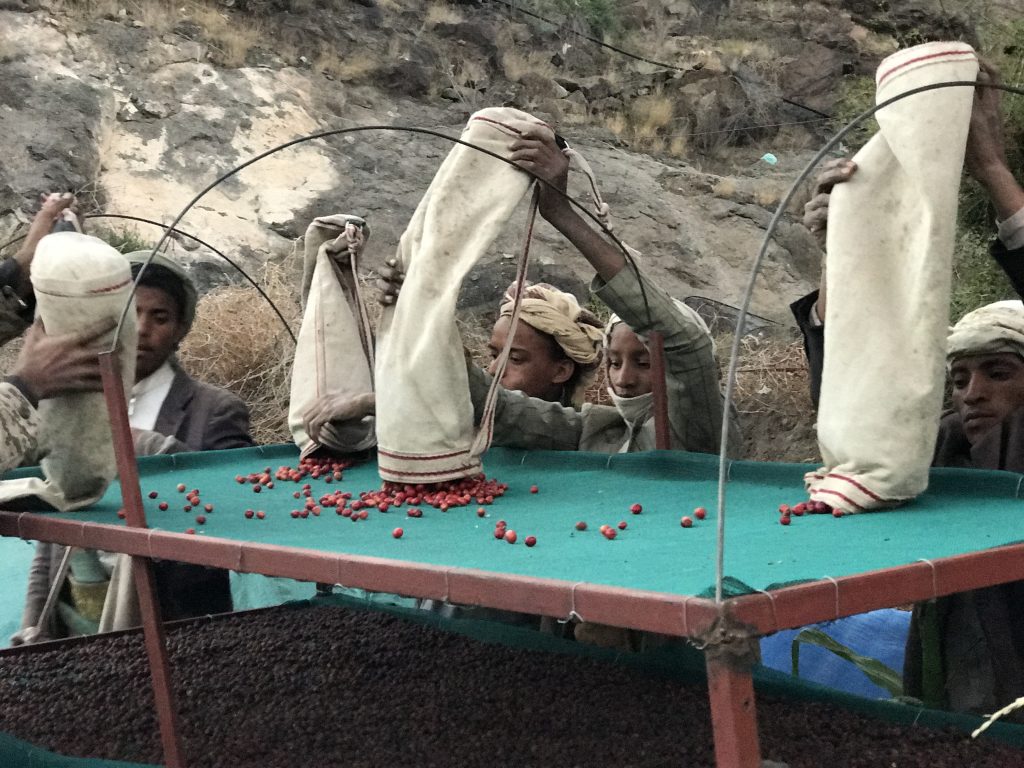 The “mother of all coffees” 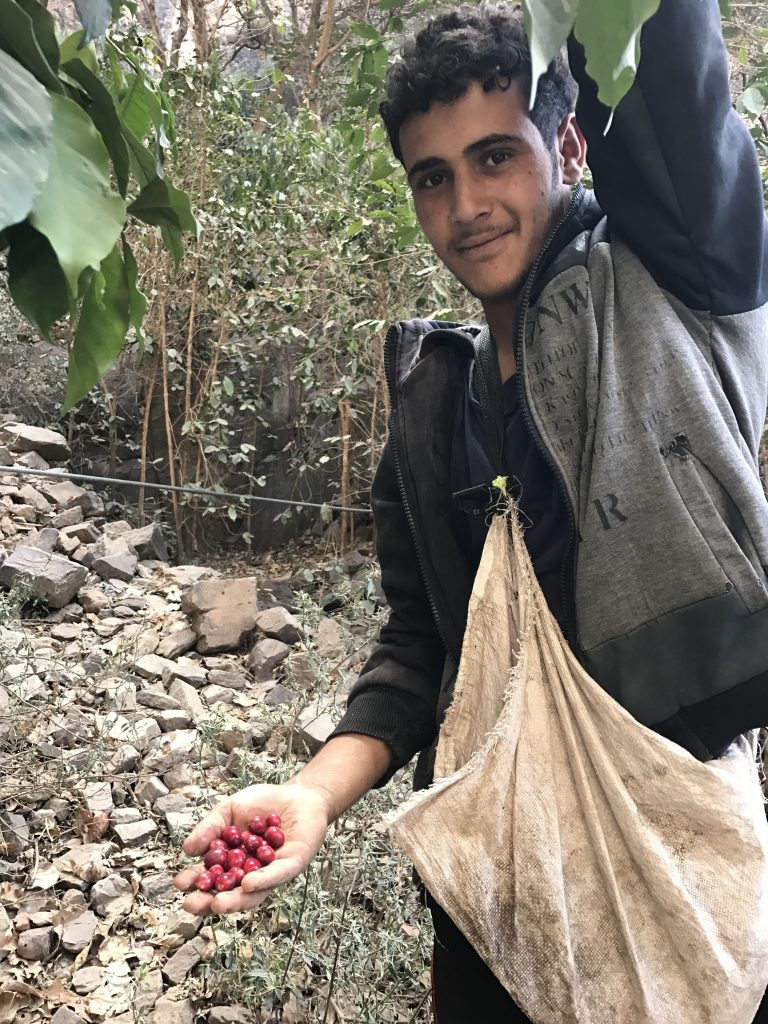 In Yemen, khat is seen as a easy money. The leaves of the plant contain an amphetamine-like substance that acts as stimulant and causes loss of appetite. It’s also addictive, therefore illegal in many Arab countries. Khat also needs a lot of water and is treated with chemicals that harm the soil. However, it is easy to sell, and for Yemeni farmers that is crucial. “Yemen is a poor country. And everywhere farmers tend to be the poorest”, states Mohammed. “Plus the land usually belongs to other people, like the leader of the tribe, who usually get part of every production.”

Despite the obstacles, Hussein and Mohammed believe Yemeni coffee should reclaim the importance it once had back in the 16th century, when the country was the sole supplier of coffee in the world and the Port of Mokha – from where it was shipped via the Red Sea – was bustling with activity. “It’s the mother of all coffees”, says Mohammed. As coffee was first brewed and sold by Yemeni merchants, he says many varietals in the world today can be traced back to Yemeni trees. “I want coffee lovers to give us a chance as I believe our coffee is one of the best out there. We can deal with the shipment. It’s like having a diamond. If you have a diamond, you’ll find a way.”

It might be that the market for Yemeni coffee will remain a niche one for some time because of its price, but change needs to happen at farm level to make the production of Specialty grade beans sustainable. Mocha Hunters believe it’s important to introduce innovation but at the same time protect the local culture and ways of the producers. “It’s what makes them unique”, Mohammed says. “We try to explain to farmers that they will get more money if they treat coffee as a treasure, if they have patience and keep the right conditions for the beans. In order to pick only the ripe cherries you might have to pick 3 times instead of one, but we show them that the extra work is worth it. In the end the efforts are paid and you end up with a cup of coffee full of stories. After all, the culture of drinking coffee started in Yemen”, he concludes with pride.

Mohammed Ali will be with us at the roastery hosting a public cupping with 3 different Yemeni coffees on the 3rd of May. He’ll talk about his experience with farmers and the epic journey from seed to cup. As a good Arab salesman, he will also try to convince you he’s got the best coffee in the world (though he won’t say it himself). The event is free and places are limited. RSVP now to secure a spot!