Jesus Hernandez started growing coffee in El Salvador back in the 1800’s. He was a man of humble origins, but very hard working and a cunning businessman. Jesus was so dedicated and such a fine trader that very soon his small plot of land turned into a sizeable and prosperous farm. Now, the local Salvadorans weren’t happy crediting the man’s success to the man’s work alone. There had to be more to it. And, devout Catholics as they were, they started a rumour that Jesus owed his good fortune to a pact he had made with some obscure force… 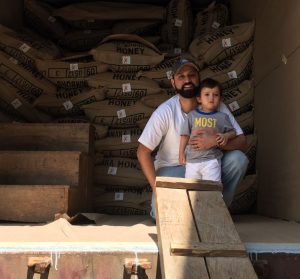 Aldo wants to raise awareness to the lack of public policies in El Salvador, reason why many coffee producers in the country struggle

No one knows if Jesus actually danced with the devil, but 200 years later his family, the Parduccis, is still going strong on coffee. And so is the tale of “El Pacto” (The Pact). But as Jesus’ great-great-grandson Aldo tell us, now the family has a good laugh when they speak of it. Aldo is manager at Finca Las Brumas, the Parduccis’ current estate in the mountainous area of Cordillera del Balsamo, 1250 meters above sea level. We met him during the London Coffee Festival and were amazed by the quality of his coffee. Not long after tasting his Pacamaras we decided it was time we had a Salvadoran coffee to call ours – and when the first sacs of coffee arrived, the words “El Pacto” were printed on it in bold letters, as well as an image of Jesus riding his horse against a famous formation in the area, La Peña de Comasagua.

A​ ​new​ ​pact​ ​to​ ​save​ ​farms​ ​beaten​ ​by​ ​civil​ ​war
El Pacto is now the brand of Las Brumas coffee and bears a new meaning to the people involved in growing it. “Today, we consider it together with my father as a pact amongst us and the family to continue the coffee tradition we inherited”, says Aldo. But at Las Brumas tradition walks side by side with alongside innovation. To face obstacles common to many Salvadoran coffee growers and to fulfill Aldo’s father’s dream the farm started investing in quality two years ago by building a processing facility. “Leaf rust, low market prices, high labor costs and low yields put us at a severe financial disadvantage. We see potential to grow in the specialty coffee market and hope to turn our shortcomings around in our favor”, he adds.

The fact the Parduccis have remained as a coffee growing family all this time is truly remarkable. A political coup d’etat in 1979 led El Salvador to a civil war that dragged on for 12 years, ruining the stability needed by the agricultural sector of the economy to thrive. Loads of people were displaced, government investment programs were disrupted and many coffee farms were abandoned. The war ended in 1992, but it caused a crack on Salvadorans’ way of living that carries on up to this day. Aldo describes a general lack of interest in agriculture as a whole: “Before, most people from the countryside grew their own food, lived off the land and genuinely enjoyed their surroundings. As of recent, it seems no one wants to work the lands and prefer the ‘commodities’ of everyday life in the towns and cities”. 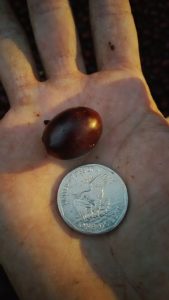 This varietal is renown for it’s impressive screen size

The coffee we acquired from Las Brumas is a natural processed Pacamara, a Salvadoran varietal born from crossings between Maragogype and Pacas beans. It is the first coffee we’ve bought directly, without the mediation of an importing company. This alone would be exciting enough for us, but we believe this to be a very special lot. It is a well rounded and fruity coffee with pleasant acidity and a sweet chocolate finish. It also scored well in the country’s last Cup of Excellence, seizing it’s 34th place. And that’s not all. The way Aldo’s family manages their plantation is proof of their commitment and determination to overcome hardships in order to preserve the local environment and improve cup quality.

All coffee in Las Brumas is shade-grown, what makes the cherries mature slowly and allows the beans to develop sugars and gain complexity while providing a home for numerous species of animals and plants. “And while yes, the yield may be less than that of plantations that are fully sun grown the idea of clearing out entire forests for the sake of growing coffee in all honesty is quite abhorrent to me. Lower yields, I think, are a trade-off we are willing to live with for the sake of maintaining our immediate ecosystems”, says Aldo. Managing shade can be quite tricky though. Too much shade results in a dark and damp environment perfect for the spreading of leaf-rust, a dangerous fungus that can damage both the yield and quality of the coffee. And as Pacamara is not a particularly resistant varietal, trimming and pruning are a never ending job at Las Brumas as well as many other local farms.

The situation in El Salvador as a whole is trickier than dealing with leaf-rust. It is well known in the country that farmers urgently need national policies to encourage production. From Aldo’s perspective, one of the main obstacles for growers is gaining access to lines of credit at lower interest rates and longer repayment terms for loans. As coffee alone is responsible for 22% of the entire agricultural produce in El Salvador, this is a major problem. “Whether directly or indirectly we generate the largest amount of jobs in the country. Many families depend on the jobs created by the coffee industry and is a means of survival for many”, Aldo stresses.

The funding matter is pressing as it often delays important steps of coffee production, such as pruning. “There are set windows or time frames for certain agricultural labours to be done and once that window closes it is just not as effective and you have to move on to the next  task at hand”, explains Aldo. The Parducci family is lucky from the financial point of view, having other businesses ventures that allow them flexibility to work on their farms. But that is a luxury that most Salvadorans can’t afford. 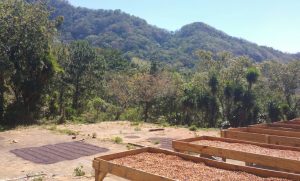 Patios and raised beds used to dry the beans

There is another reason why Salvadoran farmers need all the support they can get: they are fighting deforestation. “Coffee farms have created new biological reserves for flora and fauna and have become the lungs of the nation. Deforestation has been rampant in El Salvador in the last 30 to 40 years and it is the coffee farms that form our last line of defence against this misfortune, as most of our natural forests have been greatly diminished.”

That is why it’s so important for us as a roastery to support farms like Las Brumas and why we want more people to know about all the effort that goes into making that beautiful cup of natural Pacamara we are now serving. It’s kind of our own pact that involves consumers, buyers and producers, one that we hope will help Aldo to accomplish his goals as a farmer: “to create and maintain a quality-based, profitable, sustainable and ecologically balanced farm that my children and grandchildren can inherit, build upon and be proud of”. We also really want to see more of the experiments that Aldo’s been making in his varietals garden. He’s been growing some Geisha and Kenyan trees and hope that, in the future, he’ll be able to sell some new special micro-lots…